2008 was a long time ago, but I'll see what I can remember. It was Christmastime, and it was my first time home since I'd left for college. My friends Dan and Devin, still in high school, invited me over to play Diplomacy and drink IKEA-brand Julmust. But, as the intake of mind-altering Julmust continued, our collective attention span plummeted. Diplomacy was abandoned; we tried Monopoly. Then Scrabble. Then Boggle. In the quest for faster-paced games, Devin eventually brought out something he'd picked up at a speedcubing competition: Projective Set, or Pro Set for short. It's fast-paced and elegantly simple, and captured my imagination for years to come.

The Pro Set deck has 63 unique cards, representing every possible combination of six colored dots (with the exception of an all-blank card). Seven cards are dealt at a time. The objective is to find a set, defined as "a linearly dependent collection of cards such that any (nonequal) subset is linearly independent". Equivalently, the XOR operation of all cards in a set leaves no dots visible. Equivalently, a set has an even number of every color dot.

Let's see an example. Here's one of my homemade decks, with seven cards dealt out to start: 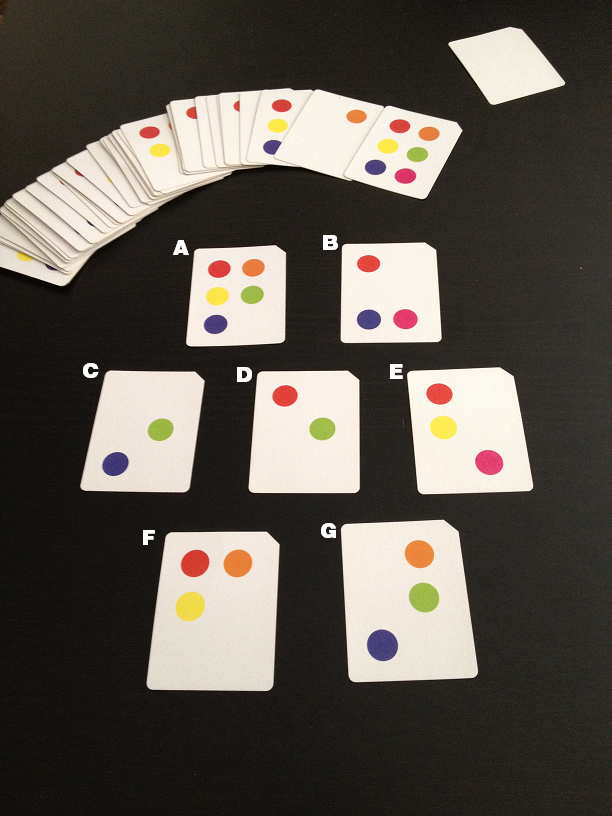 The notch in the top-right corner keeps the cards aligned, since they lack the rotational symmetry of standard playing cards. Any array of seven cards will yield at least one set; here, for example, there are three possible sets: A-C-F, B-D-E-F-G, and A-B-C-D-E-G. The player that sees a valid set first claims those cards, which are removed and replaced with new cards from the deck. Play continues until no cards remain. That's all there is to it!

Thanks to its simple rule-set, we can enjoy a decent variety of digital implementations of Pro Set. My buddy Jonas made a most excellent applet that is elegant and anti-aliased and the best for solitaire play. Someone named Tim Black made this version, which lets you play with 4-9 dots on a card; it's optimized for multiplayer play on a touch screen. The original(?) game inventors called it Zero Sumz and put a version online on their website, which is the best version for those with colorblindness, I believe.

I made my own version as well! I've tried to stay true to the gameplay and aesthetics of an old, old Java applet version (no longer available). As such, there's keyboard responsiveness for speed-players like myself, and the cards in play don't get rearranged every time a set is selected. I've also added numerous difficulty levels, from "nearly trivial" to "oh god why did I make this." If you have Python installed, I recommend checking it out!

Highlight to see the only set I found in this image: Everything but the top row middle card and the middle row left card.

It's so much more fun to play Pro Set with friends, I promise. But to do that, of course, you need a deck! Step one is to make sheets of cards to cut out—I used the power of LaTeX and \if statements to make short work of this. You can get the .tex file here and the compiled PDF here.

Step two might be a bit trickier: cutting out the cards with perfect uniformity. You want to be able to shuffle these cards, so they should all be the same dimensions with micron-scale accuracy. Eyeballs and a paper cutter will not suffice! I made a vector graphic template and cut each sheet individually on a LASER cutter. Perfect uniformity, and an easy way to get that notch in the upper-right corner (see first image) to prevent upside-down cards from making their way to the play area.