Here is a site for the Basic Lighter-than-Air Mobile Platform (BLAMP). This was a design proposal done as part of my Master's degree at Georgia Tech.

A semi-successful test run—I got a webcam to accurately track the yellow balloon, but I put the blimp battery in upside-down, which made the thing fly in reverse.

Most of the robots used for real-life studies of swarm robotics resemble remote-controlled toys in scale and complexity. But while the number and variety of RC toys continues to explode, academics are limited to whatever can be computer-controlled and monitored. For the most part, this cuts down the swarm robot candidates to a few limited options. I was motivated to design a simple, cheap, aerial swarm robot, something that lowered the barriers to enter swarm research. Airships immediately came to mind. They're big and slow-moving (good for computers trying to locate them in a room), they are passively stable, and my favorite documentary is The White Diamond, so this was the optimal way to go!

Many of the design aspects and project objectives fell into place rapidly after settling on "tiny blimps" as the focus. Helium-filled party balloons have a limited payload (5-9 grams; hydrogen balloons can carry trivially more). Therefore, mass consideration became critical in deciding on what electronics to include in this primary iteration. The balloons are confined to a room lined with motion-capture cameras, so on-board sensors are not needed. Without onboard sensors, there is no need to transmit information from the balloons to a central computer running the controls; this permits shrinkage of the radio communication electronics. In addition, we can reduce weight by using only two thrusters (as opposed to the 3+ normally found on RC blimps, which are massive enough to require extra-large balloons). The two-thruster blimp model has a greater degree of nonholonomy than the standard model, which may be a problem for a human operator without a good computer-control interface, so it is necessary to make such an interface as well.

Finally arose the issue of a name. With all the properties described above, it seemed fitting to call it a Basic Lighter-than-Air Mobile Platform. BLAMP! I'm very excited to continue the longstanding academic tradition of christening devices with unwieldy and/or silly acronyms.

There are some pretty amazing examples of very tiny RC aircraft already out there. Sergei in Mariupol (Russian language site) has instructions for building a motor that's half the mass of the next available motor, and yet develops comparable thrust.

Each BLAMP is to consist of a balloon and a gondola. The gondola must hold the various electronic elements—battery storage, wireless communication, signal processing, and two bidirectional thrusters.

The leap from remote-controlled blimp to autonomous blimp requires the introduction of computer control, which means either retrofitting an RC controller, or designing from scratch an interface that can be used from any computer. For flexibility and cost reasons, I went with the latter. As a proof-of-concept, I coupled an MICRF007 ASK transmitter chip and an ATTiny 85 microprocessor, which gives me the ability to address arbitrarily many BLAMPs with control commands. The number of agents in the swarm is limited by the fact that my control setup, for now, only addresses one agent at a time.

I chose amplitude-shift keying (ASK) as a transmission protocol because the MICRF007 IC required far fewer external components, those bulky things. All it needs is an oscillator (shared by the ATTiny85 IC), an itty-bitty inductor, and an antenna. The biggest piece of electronics, by far, was the motor driver. Without it, I had no ready way to run the thrusters bidirectionally (that is, forward and reverse thrust). You can see the relative bulk of the motor driver in this gondola mock-up:

I befriended the fab-lab operators in the GA Tech Research Institute basement, where a circuit mill lay mostly dormant. I couldn't make a full prototype (incorporating the motor driver is a lot easier with four PCB layers; I was limited to two on the mill), but it was enough to show that the ASK chip and the ATTiny controller could receive wireless signals and adjust thruster output accordingly! 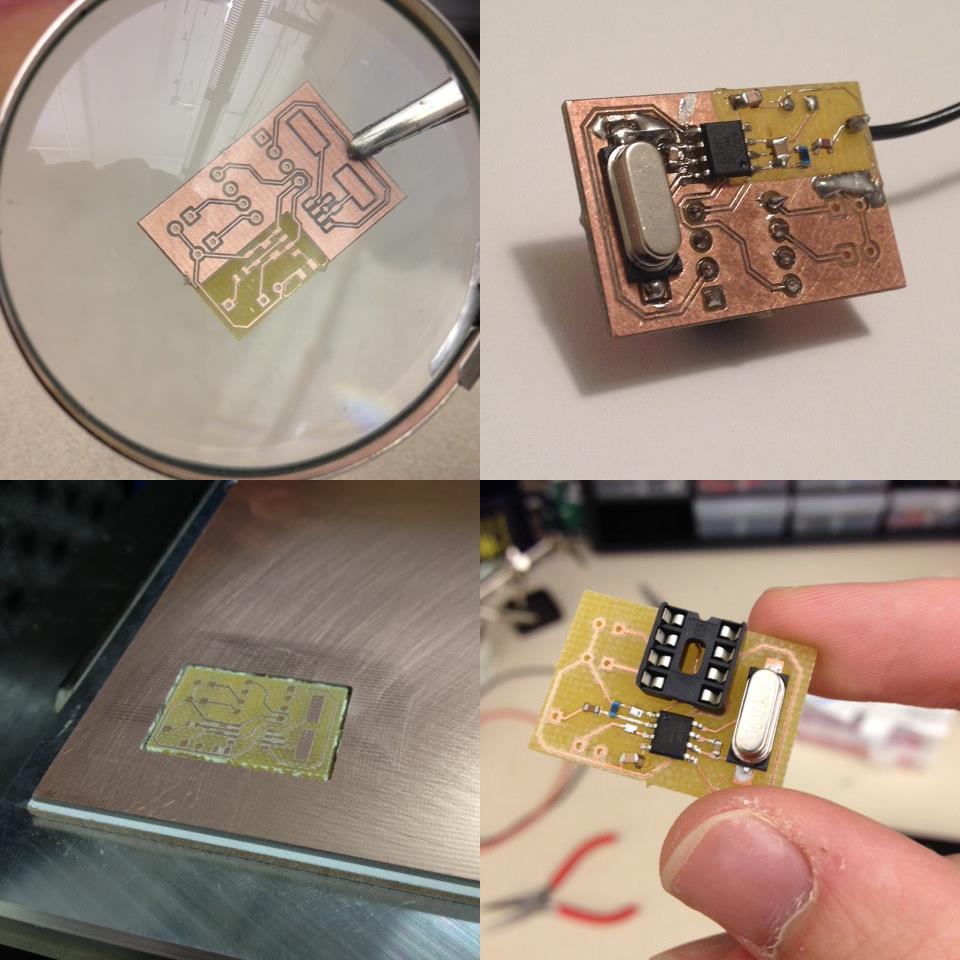 Without the motor driver IC, it is not possible for me to send forward and reverse signals to the thrusters. Moreover, the Lithium-Polymer battery and the prototype circuit's thick copper layers pushed the total gondola mass past the carrying capacity of just one balloon. So, these trial runs are done with unidirectional thrust and two helium balloons taped together to form the goofiest apparatus imaginable. But they work!